The rare black ginger in powder form. So our customers know they are getting 100% of this herb. No additives, no fillers. Also known as Kaempferia Parviflora. There are generally 2 variations of this berb. One is the Malaysian variety (Curcuma Caesia) and the other, the Thai variety ( Kaempferia Parviflora). Both have slightly different properties and efficacies.  Both herbs are excellent for the human race.

This herb used to be found only in the forests. It is now being cultivated in villages around the region. This high value herb is still expensive as a plantation can only yield a tiny crop. It also takes a specific set of climate conditions for the plant to grow. Although rare, the Thai black ginger has been in use for more than 1000 years in Indochina.

Black ginger root is widely used in traditional Thai medicine. It’s commonly used as an energy enhancer and a regenerative agent for physical and sexual pursuits. As expected, it is also a popular supplement in Muay Thai circles as it gives fighters additional stamina and muscle strength.

Black ginger extracted in alcohol, however, is more commonly used to enhance libido and sexual performance. It’s even claimed to be a natural viagra substitute because of its reported potency.

Studies have revealed that black ginger extract is a natural phosphodiesterase type 5 (PDE5) inhibitor. A PDE5 inhibitor, such as Viagra, blocks cyclic guanosine monophosphate (cGMP), an enzyme that breaks down nitric oxide in the body.

Nitric oxide is very important in the penis because it promotes vasodilation—the relaxing of the blood vessels. This increases blood supply particularly in the penis’ erectile chambers, ensuring longer lasting and harder erections.

The aphrodisiac property of black ginger extract has also been proven by research. A 2008 study confirmed that it increases aphrodisiac activity by increasing the blood flow to the testes1.

Black ginger extract has also been verified to increase the levels of dopamine in the body. Dopamine is one of the neurotransmitters responsible for libido and pleasure (the other being serotonin).

Black ginger extract has also been proven to increase the body’s rate of energy consumption (metabolism), which is beneficial for fat loss. Studies show at least two ways on how it enhances energy consumption.

A 2014 research confirms that black ginger extract increases energy consumption by activating BAT (brown adipose tissue)2. BAT, also known as brown fat, contains a lot of mitochondria, which are the powerhouse of the cell. Brown fat is responsible for converting energy from food to heat, and then distributing the resulting energy to different parts of the body.

Keep in mind that a good metabolic rate is one of the main characteristics of a healthy person. If your metabolic rate is high, you’re less likely to develop conditions such as obesity, metabolic syndrome, locomotive dysfunction, obesity, and diabetes.

Aside from increased energy, black ginger extract was also confirmed to improve endurance. A 2011 study shows that the extract inhibits inflammation5, thus enhancing muscular endurance and rate of muscular activity. 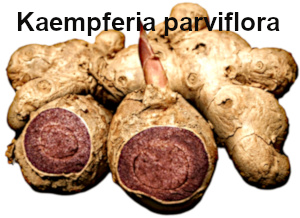 Other actions of Kaempferia Parviflora

Black ginger has anti-fungal and antimicrobial properties.Anti-allergy and antioxidant activity is present in black ginger.Black ginger can be beneficial if you have gastric ulcers.Black ginger improves blood flow in a person.

It is also known as a natural antidepressant.Black ginger can be used for stroke prevention.Used as a traditional Thai treatment, black ginger is known to cure asthma, allergies, gout,diarrhea, impotence, and dysentery.Black ginger can also be used to treat women’s menstrual problems.

1 gram twice a day or half a teaspoon twice a day. Suitable for men and women. Men of larger built can take a larger quantity.