A Keloid treatment salve to flatten and lighten keloids. The Keloid Salve is formulated with Galla Chinensis. It is an expensive herb collected in the wild. 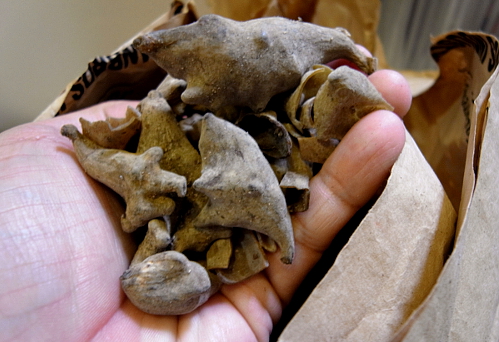 The Keloid treatment Salve is best combined with the Hei Ba Gao to provide for a more intensive treatment for stubborn keloids.

The Keloid treatment salve is not only a preventive treatment for keloids, it is formulated to soften and flatten stubborn keloids. A keloid, once hardened, can cause much inconvenience even to accommodate a slight movement of the surrounding tissues. At the same time, the hardened mass can exert pressure on nerve sections, causing sudden short sensations of pain. On the other hand, a softened keloid can be gradually flattened with the appropriate therapy.

In general, the longer the individual has suffered from keloids, the longer the length of treatment. Some individuals may have to continue the treatment for longer, possibly over a year, especially for those who have had lengthy treatment with Western medicine such as steroids, surgery or injections, as the keloid has become very stubborn.

As a keloid is a complex consequence of skin tension, dehydration and extracellular activity, the Keloid Salve is very beneficial in restoring normalization of the skin. The most immediate benefit of the Keloid Salve is the improvement of the appearance of the keloids. The keloids are less inflamed and are more elastic. This elasticity ensures that the keloids are not easily traumatized by the movement of surrounding tissues. It will also be more rounded at the edges as it is being progressively flattened.

The principal modes of action is the ability to influence the inflammatory process in the wound healing cascade and its ability to promote Type 1 and Type 3 collagen balance. The immature thickened wound is characterised by a prolonged inflammatory stage and an abundance of Type 3 collagen. The promotion of Type 1 collagen production and the winding down of the inflammatory process is directly influenced by the Keloid Salve, as manifested by improved wound healing and scar formation. This inflammatory modulation property of the Keloid Salve may stop the conversion of the myofibroplasts, the cell type known to be associated with thickened, keloid type scars.

During remodeling, collagen turnover allows the randomly deposited scar tissue to be rearranged, in both linear and lateral orientation. The Keloid Salve is best used with a cotton pressure gauze. The work of Arem and Madden confirmed that a physical change of a scar could be achieved through the application of stress during the appropriate healing phase.

Most importantly, the Keloid Salve will accelerate the process of the keloid flattening at the center, channeling the toxins to the ends of the keloid, resembling a centipede. At this stage, effort will only need be concentrated at flattening the 2 ends. There will be no recurrence once the entire keloid has flattened. Under normal circumstances, the remodelling phase is characterised by enhanced Blood circulation.

The Keloid Salve is formulated with natural ingredients with no artificial preservatives or chemicals. It is skin friendly and is a chemical free product. It is also very economical as the user only need apply a dab of the salve on the keloid.

The Keloid Salve has recorded a 84% effective rate in a test conducted on 40 individuals (Eng Wen Gui. Effect of Keloid softening and anti-itch ointment on 76 cases. China Chinese-Western Medicine Journal, 1994, 14(12):736.

Test result on 76 patients who used the Keloid Salve:

Benefits of the Keloid Salve

Only logged in customers who have purchased this product may leave a review. 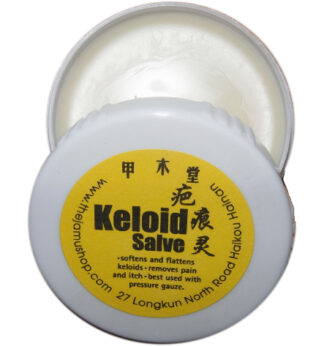