Nourishing the kidneys and originating yang, tonifying the kidneys, benefitting essence and strengthening. Helps to provide a balanced internal system to maximize your sexual potential.

Asthenia of kidneys and seminal emissions, dizziness and tinnitus. Reliefs aching and soreness of loin and knees, intolerance to cold and exremity is cold, mental tiredness, pale tongue with whitish fur, small and weak pulse.

As a traditional Chinese herb, scorpion has been used medicinally for more than 2,000 years in China. Thanks to the healing properties of scorpion venom, a toxic protein similar to snake neurotoxin, the medicinal uses of scorpions are amazing. It could yield surprising efficacy results in the treatment of nervous system diseases, cerebrovascular diseases, malignant tumors, stubborn viruses, etc.

As a matter of fact, ancient physicians in China have discovered the secret of scorpion venom way earlier and believe that it is one of the best medicines for a dozen challenging or difficult-to-diagnose diseases, such as rheumatism, hemiplegia, tetanus, drooping eyelid and mouth, tuberculosis, scrofula, stubborn eczema, cancer, stroke, epilepsy seizures, sores, nephritides, angiosclerosis, hepatitis B, etc. As a result, currently there are over 100 scorpion-based herbal formulas and about 60 Chinese patent medicines, among which the famous ones are Zai Zao Wan, Da Huo Luo Wan, Qi Zhen Dan, Qian Zheng San, Die Da Wan, Jiu Xin Wan, Zhi Teng Wan, Zhong Feng Hui Chun Wan, etc.

Since erectile dysfunction (ED) is a growing health problem in the world, more common in patients with vascular diseases as diabetes and hypertension, the use of animal venoms and toxins as pharmacological tools could not only shed light to the mechanisms involved in erectile function, but also represent a possible model for new drugs to treat ED. Scorpion is one of those TCM ingredients with potential to address ED.

Modern medicine has proved that scorpion contains 17 amino acids and 14 trace elements that are essential to human body. Hence, it is also a nutritious food. And the scorpion-based medicinal liquor and dishes are the most popular applications. Long-term use of them is believed to improve health and prevent cancer.

It is only in recent years that modern medical science is harnessing the toxins from the scorpion to help in combating brain tumours.

Each capsule 300mg contains the following:

Once daily, 3 capsules each time with lukewarm water (before meal).
Side effect, not to be taken by pregnant women.
Can be taken in lesser dosage for maintainence. Tip: Take half dose if you are 35 years old and below unless you tend to feel weak often. 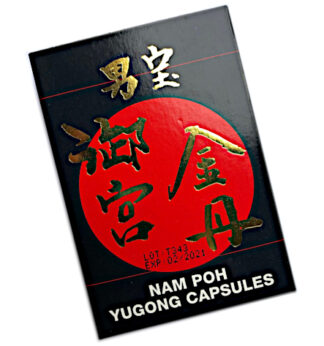