Formulated with more than ten precious Chinese herbs, particularly Hippocampus and Cordyceps. Fortifies the body and nourishes the chi (breath). Strengthens the anatomy and enlivens the brain organ. This results in a more vigorous and alert person. The very important core of the body (waist area) is also strengthened, thus benefitting the reproductive system and the sexual function of the back and waist muscles). This formula is the ideal tonic for the sexually active man. 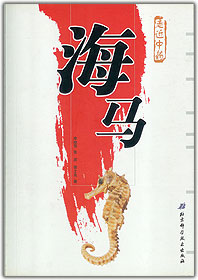 An old TCM herbalist will tell you, “Eating seahorses keeps your 80-year-old grandpa young!” It is a sexual reference to the seahorse’s aphrodisiac properties. Seahorses are not an overnight cure for infertility or lack of sexual drive, but is a long term tonic they are believed to work wonders.  In its earliest form, dried seahorses are steeped in wine for treating impotence.

Another ancient Chinese saying says, “North is Ginseng and South is Seahorse.” pointing to the seahorse’s similar strength in promoting Kidney Yang, and treating impotence.

Seahorses are also used to treat asthma, respiratory ailments, circulation problems, joint pain and incontinence. Used externally they are good for restoring and cleaning the skin, and helping to prevent early signs of aging.

Whole dried seahorses are popular in soups and are said to taste a bit like scallops, but are more salty and full of tiny bones. Seahorses are monogamous and mate for life.

Seahorses are unique in being the only species in which the male gets pregnant. The female injects eggs into the male’s pouch, where the eggs are fertilised and carried for up to four weeks until they are born. Seahorses can also lay claim to being the most romantic creatures on the planet, performing a dainty daily underwater dance with partners and generally staying faithful for life – even, as experts have found, if they are placed in a tankful of single, available seahorses of the opposite sex. ( SCMP, Endangered Sex Boosting Seahorses Given a Life Buoy, 24th May 2004)

And yes, seahorses can also be eaten. Whole seahorses are made into soup. The taste is similar to dried scallops. The Cantonese have a Seahorse Soup recipe that calls for 4 seahorses, pork stock,

ginger and carrots. It is considered an added benefit to the meal if the male seahorse happens to be pregnant. Of course one must be careful when trying to eat the seahorse. They are served anatomically intact. ( East Meets West, Vigore Chicago Magazine)

Also known as caterpillar fungus has been described as a medicine in old Chinese medical books and Tibetan medicine. It is actually a rare combination of a caterpillar and a fungus!

Cordyceps is a genus of parasitic fungi that grows on the larvae of insects. When these fungi attack their host, they replace its tissue and sprout long, slender stems that grow outside the host’s body.The remains of the insect and fungi have been hand-collected, dried and used in Traditional Chinese Medicine for centuries to treat fatigue, sickness, kidney disease and low sex drive.

Each capsule 300mg contains the following:

Taken twice daily, 4 capsules each time
Side effect, not known.
Can be taken in lesser dosage for maintainence. Tip: Take half dose if you are 35 years old and below unless you tend to feel weak often

4. https://www.ncbi.nlm.nih.gov/pmc/articles/PMC3121254/Traditional uses and medicinal potential of Cordyceps sinensis of Sikkim