The toad will secrete a layer of serum over its skin to deter a predator. This substance, called bufonin, is used in small amounts to combat a wide variety of skin bacterium.

The cream is smooth and light, and does not smell. Transparent when applied. It can also be applied on a piece of lint and put over the affected area. Chang the lint occasionally.

Medicinal toad venom is the dried white secretion of the auricular glands and the skin glands of Bufo bufo gargarizans Cantor or Bufo melanotictus Bchneider, Bufonidae. It is traditionally acquired by stimulating the skin of the toad and when the substance is secreted, it is carefully scrapped off the skin and processed. After processing with other herbs, this famed formula is formed into a light odorless cream for application. The toad has been described in TCM research as ‘Angel of Human Health’.

New developments in medical science has led to innovations such as:

In Japan and China, toad venom has been used as an expectorant, anti-haemorrhagic, diuretic and cardiac stimulant, and some peptides in the secretions of South American frogs and toads have antibiotic and anticancer properties. In fact, the pharmaceutical industry was built upon the realization of the healing and therapeutic potential of many lead compounds used in ethnic or traditional medicines.

Only logged in customers who have purchased this product may leave a review. 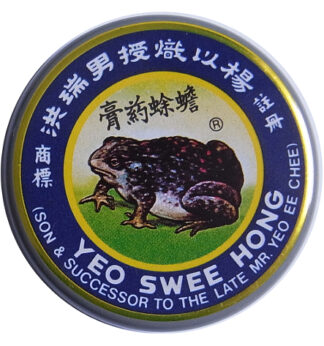