[ Pathogenesis and pathophysiology of Rosacea ] 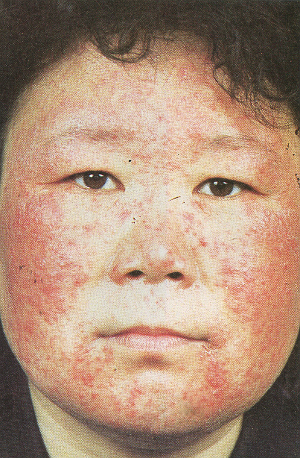 Rosacea – This condition results from stomach fire accumulating in the lungs with blood stasis congealing and binding. (According to Western medicine,) it is caused by long term dilation of the local blood capillaries which is due to dysfunction of the vasomotor nerves. Predilection for alcohol, indigestion, endocrine imbalance, and persistent external climate acting upon the skin, such as working under high temperature, sunburn, and exposure to wind, are all precipitating factors. 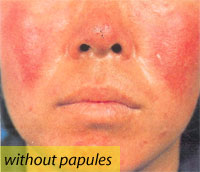 The skin lesion is restricted to the center of the face from the forehead to the chin and especially on the nasal region. The initial symptoms are red spots which occur paroxysmally and transiently which may be followed by groups of papules and suppurative blisters varying in size from pinheads to soybeans. These red spots later will not subside and give rise to dilation of the capillaries (see picture above).

In severe cases the local tissues are found to have thickened and a hammer nose (see picture) is thus formed. As a rule, there are no subjective symptoms. TCM practitioners believe that the demodex mite (Hominis, Brevis, Homonislongus) contributes to the cause of rosacea and should be eliminated to restore normalcy to the skin. Western dermatologists have shown increasing interest in this theory.

[ Difference between Rosacea and Common Acne ]

It is common that Rosacea does not present with blackheads that are seen with Acne Vulgaris. Also the age of onset, and the location of redness is a clue. Rosacea is commonly an adult disease, and is generally restricted to the nose, cheeks, chin and forehead. It can coexist with acne vulgaris. Some rosacea sufferers have a significant acne component in their symptoms so it can be easily confused with acne vulgaris. The papules and pustules of rosacea tend to be less follicular in origin.

Rosacea will probably have an underlying redness that is related to flushing and thus looks different to acne vulgaris. Acne sufferers normally do not have the accompanying redness. Rosacea usually begins with flushing, leading to persistent redness. As both conditions are inflammatory, the treatment for rosacea and acne vulgaris can be somewhat similar, but some of the acne vulgaris regimes are too harsh for rosacea affected skin and can severely aggravate the condition.

[ Pathogenesis and pathophysiology of Common Acne ]

The ancient name for this condition is fei feng fen chi (acne due to lung wind) which is caused by the accumlation of of heat in the three channels of the lungs, spleen and stomach. (According to modern Western medicine), the maturing sex glands during puberty enhance the secretion of the endocrine system thus leading to hypersteatosis and occlusion of the sebaceous glands associated with hair follicles. Chronic suppurative folliculitis is the subsequent result when complicated by secondary bacterial infection. Overeating fats and carbohydrates and indigestion are often precipitating factors.

Acne tends to develop around the areas densely supplied with sebaceaous glands, such as the face, upper chest, and back. Lesions are often multiform. Comedones are typically the earliest sign. Papules, suppuration, nodulation, abscess, and scarring occur sequentially in the course of development. At the early stage, once can express the comedones and squeeze out a tiny blackhead the size of millet with some yellow white substances.

Press release on the activity of demodex mites

San Diego, CA (PRWEB) March 27, 2004 — One of the most common yet often over diagnosed facial rashes is rosacea, a chronic, relapsing and potentially life-disruptive disorder of the facial skin that affects an estimated 14 million Americans. Many patients come to the clinic with redness on the cheeks, nose, chin or forehead that may come and go. The disease is more frequently diagnosed in women, but more severe symptoms tend to be seen in men.

Facial burning, stinging and itching are commonly reported by many rosacea patients. Certain rosacea sufferers may also experience some swelling (edema) in the face that may become noticeable as early as the initial stage of the disease. It is also believed that in some patients this swelling process may contribute to the development of excess tissue on the nose (rhinophyma), the condition that gave the late comedian W.C. Fields his trademark nose.

It is often thought that fair-skinned patients who tend to flush or blush easily are believed to be at greatest risk, while in fact facial redness from rosacea is simply more obvious in lighter skin. A normal blush or sunburn may appear the same, as can flushing from medications such as niacin or some antihypertension drugs. Flushing occurs when a large amount of blood flows through vessels quickly and the vessels expand under the skin to handle the flow. However, people with extensive sun damage, certain skin types and even treated rosacea patients can still have a red face or blood vessel streaks, which is often misdiagnosed as active rosacea. This is because visible blood vessels (telangiectasia) not only develop with rosacea (or were likely always there), but there may be some residual persistence of redness from the dilation of blood vessels during active disease.

Unlike some conditions, there are no histological, serological or other diagnostic tests for rosacea. A thorough examination of signs (appearance of bumps or pimples) and symptoms (redness, flushing, and swelling, burning, itching or stinging) as well as a medical history of potential triggers lead to the diagnosis. The National Rosacea Society suggests that the most common triggers of rosacea were sun exposure, emotional stress, hot or cold weather, wind, alcohol, spicy foods, heavy exercise, hot baths, heated beverages and certain skin-care products. In other words, almost anything that is potentially stimulating is bad news for rosacea. Unfortunately for some, certain conditions such as lupus, seborrheic dermatitis, drug eruptions, and even rare forms of lymphoma can look just like rosacea and are often missed by the untrained eye or worse when the patients are diagnosing themselves.

Rosacea is not an infectious disease, and there is no evidence that it can be spread by contact with the skin or through inhaling airborne bacteria. However, there has long been a theory that parasites in the hair follicles or oil glands or the face can stimulate inflammation by their activity or even their presence. One such organism is the Demodex folliculorum mite, which studies have shown to be more prevalent and active in rosacea patients then in control groups. Early vascular and connective tissue changes probably create a favorable setting for a growth of Demodex folliculorum. This may represent an important cofactor especially in papulopustular rosacea, in which a delayed hypersensitivity reaction is suspected, but it is not the cause of rosacea. On the other hand, clearing rosacea signs after oral tetracycline or sulfur ointment may not affect the resident demodex population.

As rosacea is characterized by flare-ups and remissions, and research has shown that long-term medical therapy significantly increased the rate of remission in rosacea patients, it behooves patients to use a maintenance regimen. In a six-month multicenter clinical study, 42 percent of those not using medication had relapsed, compared to 23 percent of those who continued to apply a topical antibiotic.

Therefore, treatment between flare-ups can prevent them. A rosacea facial care routine often starts with a gentle a refreshing cleansing of the face each morning. Sufferers should use a mild soap or cleanser that is not grainy or abrasive, and spread it with their fingertips. A soft pad or washcloth can also be used, but avoid rough washcloths, loofahs, brushes or sponges. The face should be rinsed with lukewarm water several times and blot dry with a thick cotton towel.

It is important to prevent a diseased condition from occuring, but once this condition develops, early diagnosis and early treatment should be conducted as soon as possible to prevent the condition from developing further or transmitting to other organs. after invading the human body, the pathogen may deepen its positions until attacking the Zang Fu organs. The outer manifestations are only the symptoms and signs of the imbalance rather than their essences. Thus, to treat stubborn cases, internal administration is necessary.