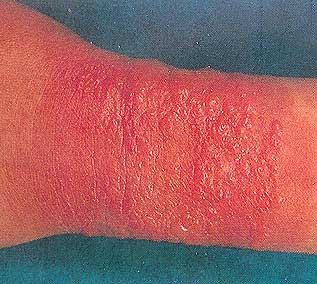 Urticaria is called pei lei (budding) in the classics. This condition is often caused either by dampness existing in the surface of the body complicated by wind heat or wind cold or by damp heat accumulating in the intestines and the stomach and dysfunction of the chong and ren due to irregularity of the organism.

(According to modern Western medicine), causative factors may include allergens such as fish, shrimp, and crab; certain medications; insect bites, contact with certain plants; internal infections; intestinal parasites; and functional impairment of the digestive tract.

Exposure to cold, heat, wind, and light and emotional factors may also be causative agents. Local edema (i.e.) the wheal. is due to any of these causative factors causing the histocytes in the skin to release histoammonium thus causing dilation of the tiny blood vessels and increased permeability of the walls and blood vessels. Also known as hives.

Wheals may appear suddenly and may also disappear within several hour. Typically they recur in groups incessantly. The patient may have outbreaks of hives from once to several times a day. In acute cases, no new wheals will usually appear after the first week. In chronic cases, urticaria may attack the patient repeatedly and last from weeks to years. The lesions take the form of reddish or whitish bumps of various sizes. In some cases there may be accompanying diarrohea followed by pain. The skin scratch test typically is positive and there is often an elevated acidophil leukocyte count.

The typical lesion of urticaria is a pale-to-red well-demarcated papule or plaque. Lesions may be round, oval, annular, arcuate, serpiginous, or generalized. They resolve without post-inflammatory pigmentary changes or scaling.

Also known as xi pi feng zheng (delicate skin rash), this condition is primarily an allergic reaction of the skin to insects, such as fleas, bedbugs, ticks, mites, and mosquitos. pathogenic wind and heat are believed to be involved.

This condition is commonly found in infants and during the summer and fall. The body trunk and the proximal areas of the extremities are the most likely sites. The basic lesion is a puffy, red papule similar in shape to a shuttle and the size of a pinhead. There is often intolerable itching leading to secondary infection after scratching. Although the lesion may fade within one to two weeks, pigment sedimentation may not later be relieved. This condition may come and go cyclically as well.

In our experience and as per the medical philosophy of homeopathy, cortisone in any form (oral, systemic or local) is not a wise option for treating Urticaria. As per the homeopathic approach and the philosophy, cortisone is a suppressing measure and there are all chances of relapse after stopping the use of cortisone.

It has been observed in daily practice, that, use of cortisone produces dramatic result initially. However, its influence is quite superficial, as the eruptions not only relapse after stopping the steroids, but they relapse more aggressively. The use of steroids is not recommended due to the following observations:

1. It helps only superficially and temporarily

2. Stopping of the steroids eventually leads to the reappearance of eruptions

3. The eruptions, which relapse after the use of steroids, are more resistant than before

4. The extent of eruptions increases after stopping the steroids in most cases